So "Individual X" Turns Out To Be 2 Federal Agents 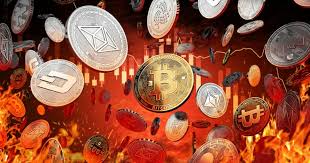 The U.S. Justice Department sent ripples through the cryptocurrency world in November when it announced it had seized nearly 70,000 Bitcoins from a person the agency would identify only as “Individual X.” Now, new clues point to who may have owned the stash, which today is worth more than $3 billion.

According to recent court filings in the forfeiture case, the proceedings are related to a criminal case involving two corrupt federal agents: Shaun Bridges, who worked for the Secret Service; and Carl Mark Force IV, formerly of the Drug Enforcement Administration. Both men were investigators in a case involving Silk Road, a notorious online drug bazaar, but both went to prison for conducting crime sprees of their own involving extortion and robbery.

While the Justice Department did not reply to requests from Fortune for comment, there are clues in the new documents showing possible connections between Bridges and Individual X. Among such clues is a Justice Department statement in the newer case that “Individual X was able to hack into Silk Road and gain unauthorized and illegal access to Silk Road and thereby steal the illicit cryptocurrency.” In the earlier case, Bridges was convicted of using the log-in credentials of a Silk Road informant to repeatedly steal from the site.

Shortly before Bridges was due to enter prison in 2016, he was arrested and charged a second time after authorities declared he was poised to flee the U.S. Reports at the time, which noted that Bridges’ flight plan involved applications for citizenship in foreign countries and bulletproof vests, suggested he may have had other secret cryptocurrency wallets.

As for the case the Justice Department announced last November, it involves a cryptocurrency wallet tied to Silk Road that contained a large stash of Bitcoins whose owner could not be identified for years. The Justice Department made a breakthrough in 2020, however, when a forensics firm called Chainalysis was able to trace transactions involving the wallet to Individual X. It is significant that the last such transaction occurred in 2015—shortly before Bridges went to prison. That timing provides more circumstantial evidence that Bridges is the individual in question (Force was in custody at the time of the transaction).

A lawyer familiar with the earlier criminal proceedings, who spoke on condition of anonymity, told Fortune that it is notable that, shortly after it was filed, the Individual X case was reassigned to a different judge—U.S. District Judge Richard Seeborg, who issued an order in November declaring the case to be related to the Bridges and Force case. Seeborg sentenced both men to prison in 2015.

According to the Bureau of Prisons website, Bridges is incarcerated in a federal penitentiary in Nashville, and is slated to be released in November. Meanwhile, the site shows Force was released from prison last October. A person familiar with Force’s case said he was released early as a result of the pandemic. Fortune was not able to reach either man directly for comment.

It is unclear what arrangement the Justice Department made with Individual X in order to enter the forfeiture agreement. Such a deal would likely have involved the individual turning over the password to the digital wallet, since the cryptography protecting such wallets is all but unbreakable.

In addition to 69,370.22491543 Bitcoins, the Individual X wallet contained a similar amount of three spinoff currencies known as Bitcoin Cash, Bitcoin Gold, and Bitcoin SV. Together, those other currencies are worth around $50 million.

All of those digital currencies are now in a wallet controlled by the Justice Department. In the past, the agency has sold off seized Bitcoins via auctions conducted by the U.S. Marshals Service.

Those earlier auctions have included the personal Bitcoin fortune of Ross Ulbricht, a.k.a. the Dread Pirate Roberts, who ran Silk Road and is serving a life sentence in prison after unsuccessfully petitioning former President Trump for a pardon. Those auctions involved multiple blocks of several thousand Bitcoins, which fetched the federal government tens of millions of dollars.

Court filings in the Individual X case include a statement from Ulbricht saying he will not make any legal claims to the nearly 70,000 Bitcoins seized from the mystery individual.

Any auction involving the Individual X Bitcoins is likely to be closely watched, given how the price of the cryptocurrency has soared in recent months—one Bitcoin is currently worth around $43,000. Meanwhile, billions of dollars’ worth of other Bitcoins tied to Silk Road remain unaccounted for.

Despite the circumstantial evidence that Individual X may be Bridges, the proof is not conclusive. According to Katie Haun, a former prosecutor and crypto expert, the court’s determination that the cases are related does not necessarily implicate Bridges: