What is Blockchain-based Social Media? 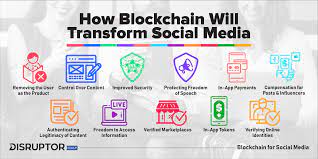 Wondering how Blockchain can impact social media platforms? You have landed on the right page.

This article will explain what Blockchain-based social media is, concerns related to traditional social media platforms, and what happens when Blockchain is incorporated into such platforms.

Talking about social media, the big names that come to our mind are Facebook, Twitter, Instagram, Youtube, Whatsapp, Snapchat, etc.  Social media has changed the way of communication since its arrival. However, some of the changes aren’t actually beneficial. There are many drawbacks to the widespread use of these typical social media platforms. For instance, spreading misinformation on social media because the platform lacks to moderate the content effectively. This has been observed recently in the COVID-19 outbreak that social media has allowed people to spread false news on different social media platforms. Moreover, the Centers for Disease Control and Prevention(CDC) claims that this misinformation has some negative impact on the conversation about COVID-19 all over the world. Not only in the case of a pandemic but even before that, social media has been dealing with issues related to privacy, user control, censorship, political neutrality, and other miscellaneous activity resulting in riots.

So to overcome this problem, a decentralized Social network is implemented while developing the new social media applications using Blockchain Technology.

What is Blockchain Social Media?

As technocrats and Blockchain experts continue to think about technology development, economic models, and freedom of speech, Blockchain has emerged as a viable solution for solving many issues, including social media.

Social media platforms have always been an entry point for establishing social communications for billions of people, and at present, platforms based on Blockchain technology are attracting a lot of public attention worldwide.

Blockchain Social Media are nothing but decentralized platforms that allow the development of applications and smart contracts. The significant benefit of such platforms is that they offer end-to-end encryptions for every interaction enabling individuals to have more privacy and control over their information.  Blockchain Social media platforms provide some major benefits like In-platform transactions, Crowdfunding, and Rewarding their users with exclusive offers. We will discuss them in detail later in the article.

If you have been paying attention to the news, you must have heard a lot about social media threats. Traditional social media platforms have always been under the limelight due to their privacy and security concerns.

Undoubtedly social media have changed the entire way of communication. Still, they have complete control over users’ data, and thus, they are able to control the Servers owned by any business that operates centralized social networking popular social media platforms track user activity. Not only this, such platforms sell the aggregated information in order to provide the highest bidder with more helpful targeting for their advertising and marketing purposes. Since all platforms such as Facebook, Whatsapp, Twitter, and others are centralized, they very well exploit the user’s content.

Let’s explore what happens when Blockchain is incorporated into social media platforms.

User privacy on social media platforms like Twitter, Whatsapp, Facebook, and others is a growing concern. This is because they are governed and monitored by centralized corporations. Having an account on these platforms means you are giving away your privacy rights in their hands. Moreover, content posted on such media platforms is also used frequently for political gains and to curb dissent.

For example, in July 2020, it was announced that the Twitter accounts of the most influential people in the world were hacked to a crypto-related scam. Prominent and high-profile accounts were targeted in the Twitter attack, including Bill Gates, Elon Musk, Joe Biden, George Wallace, Kanye West, Kim Kardashian, Wiz Khalifa, Warren Buffett, Mike Bloomberg, and Jeff Bezos.

Coming to Blockchain-based social media platforms ensures greater privacy and allows users’ right to express themselves freely. Distributed ledger technology enables users to make transactions privately as only the sender and recipient know about the transaction’s contents. Blockchain enables people to express their opinion without the risk of punishment.

As we already mentioned, traditional social media platforms are centralized, meaning people’s data is not in their hands. Anyone can edit the shared information or can even delete it permanently without users’ consent.

Blockchain has introduced ‘Minds,’ a decentralized social media platform allowing users to permanently save their content, ensuring that nobody can ever delete it once published. With Minds, users can publish their content on the “permaweb” with no additional setup required.

Minds CEO Bill Ottman ensures that the platform provides optionality to the users, explaining that users may delete all previous activity traces if they so chose to. Ottman believes that Blockchain is just an inevitable evolution, and immutable ledger will be more common in the years to come.

Apart from security and privacy, content producers on social media platforms are losing a significant amount of money due to the involvement of third-party intermediaries. Blockchain-based social media platforms allow users to have complete control over where and how their content can be distributed. The distribution capability gives them the improved capacity to profit from the production of passive income.

Not only this, such decentralized platforms reward users for posting on their networks. This phenomenon is similar to most blockchain ecosystems, as rewards come from the network’s native cryptocurrency.

What Blockchain Contributes to Social Media?

As discussed above, centralized social media platforms lack many things. Therefore, blockchain provides solutions to overcome those challenges. Let us discuss the basic concepts that are required to create a better social media network.

Open-source code: With blockchain technology, it is possible to keep an open-source code. This will have the advantage of inspecting the data algorithms.

Decentralized control: With blockchain technology, decentralization can be implemented. This will allow removing the centralization through the network, and no company or government will be liable to take action.

Democratic decision: It is the optimum choice of everyone to have a democratic system. So why not social media also adapt to the network structure will allow everyone to make decisions democratically. If this is not achieved, then social media networks can be split into multiple ones just like bitcoin, Linux, and ethereum. They all have Y-shaped multiple versions.

Explainable AI: Including blockchain networks into social networks resulting in implementing explainable Artificial intelligence(AI) could be a considerable step towards digital transformation. This system has the ability to explain the reasons behind every judgment.

What are Decentralized Social Networks?

To understand blockchain social media in a better way, let’s know the meaning of decentralized social networks. All the blockchain social media networks come under decentralized social networks. Here, the data is not controlled by any central authority or government organization. Data will only be served as per the wish of the user i,e, on the user’s request. This storing of data into different servers independently with high security.

Servers owned by any business operate a centralized social network. Now with decentralization, data can be stored in any part of the world. It will not be stored in a centralized network. It provides transparency and high security with more control to users. With decentralizing techniques, a user can determine how it operates and what users can say. A set of terms can be established by the federal social network, which is acceptable by the users. So, in short, no company or organization has to handle the monitoring of the site behavior. Users can do that in a decentralized social network.

Now we have been talking a lot about decentralization in social media platforms, but why are we choosing it? Let us find out its benefits:

However, the list is not limited; many more social media platforms are available right now, and many more are still in the development stage. They offer some exciting advantages and high security as compared to centralized social media.

Predicting success is not always easy, especially the ricks surrounding technology and social media. The challenges that it could face include user adoption rate, ownership-accountability model, and competition with existing big social media platforms. However, some uncertainties can be overcome using decentralized applications. The following things can be accomplished and required in digital technology, which can only be possible using blockchain-based applications.

The alternative tech system provided by the blockchain is here to stay like the cryptocurrencies, so investing time and money in learning blockchain technology can be an excellent asset for you to move ahead in your career.

When it comes to traditional social media platforms such as Facebook, Twitter, and Youtube, the fundamental problems include fake news, excessive trolling, censorship, and demonetization, respectively. No matter which way we look, the decentralized nature of Blockchain technology is the future of several fields, especially in social media, because of the fact there is no central organization or supervisor controlling value.

To end up, we can say that these Blockchain-based social media platforms may transform the way we interact on the internet.

So when are you switching to these social media platforms? Let us know your opinion and views in the comment section below.